George Shirley, a longtime NATS member and one of America's most versatile tenors and enlightened musicians, will be honored during the 53rd NATS National Conference with the organization’s Lifetime Achievement Award. Shirley has on a number of occasions served as one of four Master Teachers for the NATS Intern Program, most recently in June 2012 at Colorado State University in Ft. Collins. He also remains in demand nationally and internationally as performer, teacher and lecturer. Shirley originally joined NATS in 1981. 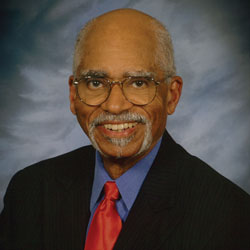 In May, 1994 the tenor combined forces with renowned baritones Robert McFerrin Sr. and William Warfield, along with other artists, in a concert at Howard University in Washington, DC in support of plans for a Marian Anderson National Conservatory of Music. On April 9, 1994, George Shirley was inducted into the Philadelphia Academy of Vocal Arts Hall of Fame, along with Metropolitan Opera colleagues Tatiana Troyanos (post.), Charles Anthony, and Dominic Cossa. Mr. Shirley sang the role of Herod Antipas in Richard Strauss’ opera Salome with soprano Maria Ewing in the title role in the inaugural season of the Michigan Opera Theater’s new Detroit Opera House in June, 1996. The summer of 1998 found the tenor singing his first-ever staged performances of the role of Sportin’ Life in Gershwin’s Porgy and Bess at the Bregenz Festival in Austria.

In May, 1999, George Shirley performed the narrations in Charles Ives’ symphonic work Three Places in New England with the Chicago Symphony Orchestra conducted by John Adams. He sang the role of Eumete in Monteverdi’s opera Il Ritorno d’Ulisse in Patria during the 1999 summer season of Glimmerglass Opera in Cooperstown, NY. In January, 2003, he appeared in the cameo role of Roscoe in concert performances of Sondheim’s Follies at The Michigan Theater in Ann Arbor,

Michigan. These performances, given in celebration of the Theater’s 75th Anniversary, included four members of the original Broadway cast plus Tony Award winner Donna McKechnie. In October 2005 Mr. Shirley combined forces again with William Bolcom at the piano to perform an aria from the composer’s opera A View from the Bridge at the dedication of the new Arthur Miller Theatre on the campus of The University of Michigan. In February he joined University of Michigan faculty colleagues Geri Allen, Ellen Rowe, Robert Hurst, Donald Walden, Michael Gould, Ed Sarath, Dennis Wilson, and guest jazz greats Carmen Lundy and Jimmy Cobb in a performance of the late Mary

Lou Williams’ Mass for jazz ensemble, soloists and choir. In April Shirley appeared as guest soloist on a concert at Jackson State University in Mississippi in an effort to raise funds to revive Opera/South, an opera company founded in that city in 1970 for the express purpose of providing African-Americans the opportunity to perform operatic roles. In March, 2013, he stepped in on fairly short notice to perform the role of Father Grenville in Eugene (OR) Opera’s production of Jake Heggie’s Dead Man Walking.

As a teacher, George Shirley was selected as one of the Distinguished Scholar-Teachers for the school year 1985-86 at the University of Maryland, College Park, where he served as Professor of Voice from 1980 to 1987. In 1979 he was selected Andrew W. Mellon Humanist-in-Residence in the College of Liberal Arts at Howard University, and returned to that historic institution in 1986 as Visiting Professor in the Department of Music. The University of Iowa, Montclair State College (New Jersey), Howard University, Morgan State University, The University of the District of Columbia, Montgomery College (Maryland), the Baltimore School for the Arts, Hampton University (Virginia), the Cincinnati Conservatory, the Manhattan School of Music (NYC), Rust College (Mississippi), Louisiana State University, the Aspen Music School, the American Institute of Musical Studies (Graz, Austria), and The Cape Town (South Africa) School of Music are a few of the institutions that over the years have availed themselves of Professor Shirley’s skills.